break the bias: women in media

Change starts at home, and we are working hard to break the bias and elevate women’s voices right here on Vancouver Island.

A recently published (2021) study from Simon Fraser University found that women’s voices continue to be underrepresented in the media. The Gender Gap Tracker continues to track various measures of representation in the media, and you can even enter your own text for real-time analysis. 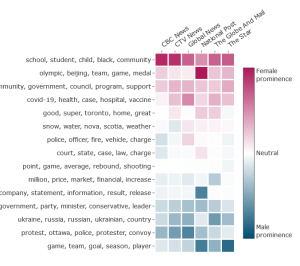 As the report points out: “Women’s voices are disproportionately underrepresented in media stories. The Global News Monitoring Project has been tracking the percentage of women represented in mainstream media since 1995, when it was 17%. Twenty years later, in 2015, it had increased to only 24%, with a worrisome stalling in the previous decade [1]. At this rate, it would take more than 70 years to see 50% women in the media, a true reflection of their representation in society.”

And of course, it’s not just in film or media. We’ve been reminded of that fact recently by several of our clients, who are drawing attention to the ongoing inequality in their respective fields.  For example, finance is another industry lacking gender equality according to The Gender Gap Tracker. Luckily, there are thousands of women fighting for the representation and education that’s required to close the gap in financial literacy and career opportunities in the field. One of them is Anna Hilberry, and we’re so proud to help tell her story and elevate her online presence.

Working as an investment advisor (a traditionally male space that continues to be dominated by men), Anna Hilberry courageously advocates not only for getting more women into the industry, but for speaking directly to women about their finances. She says, “You can be successful in our industry… you can have it all!” Anna realises that shifting these demographics in favour of more female representation is no small feat. Bias, misogyny and a lack of opportunities for women continue to plague the industry, and it has taken Anna a lot of hard work and perseverance to prove her value to clients and colleagues, and empower other women to find their place in the industry.

Anna’s YouTube channel is making Financial Literacy and education accessible to all people, especially those who might be hesitant to go into a traditional banking space because they don’t feel seen or heard. As a single mother with diverse life experience, Anna is able to bridge that gap in her social media – and in person – with poise, compassion and pragmatism. Thanks for being a part of the solution, Anna!

Jen Segger challenges us to be the best versions of ourselves

Empowered women empower women! Although you may not think of the fitness world as still presenting barriers for women, there are still many pursuits in which women continue to feel marginalised. There aren’t a lot of stories of women leading the way in extreme sports, especially in the world of Adventure Racing.

“I want women to have the confidence to push boundaries and explore more, to challenge themselves,” says Jen Segger, an accomplished athlete and long-time coach in the sport.

Some of the hesitancy women feel about hitting the trails might be around safety concerns. Women also often face greater time constraints, due to family and household responsibilities as well as other expectations. And while there are plenty of training opportunities in trail running and adventure racing, few of them are designed by female athletes to be inclusive and adaptable. Jen is changing all that, with in-person and online training programs for people with diverse situations, goals, experience levels and abilities. She’s an inspiring example for prioritizing our needs and goals so that we can show up in other spaces as the best version of ourselves.

Jen has travelled the world competing in adventure races, she’s a devoted mother, and she is a sought after endurance coach with numerous programs to help anyone follow their adventure dreams. Yes, you can do this, too!

Mia Golden has worked as a producer, director, writer and actor on dozens of independent media projects. She has also directed family and youth counselling and intervention programs for over 20 years. She wrote, produced and acted in the feature film Fragile Seeds, and is also producing and directing the upcoming documentaries Tug of War and Tied to a Lie – sister films that expose the horrors of human trafficking and exploitation of youth. We asked Mia to tell us about her experiences in filmmaking, and what inspired these challenging projects.

Tug of War is what resulted from feeling like I couldn’t take it anymore. It’s a strange thing to be immersed in society’s underbelly. Where the abnormal starts to feel regular. A colleague of mine recently said to me that another colleague vomited after a session with a client, having heard the story of the client’s recent sexual assault. She vomited. My colleague said, ‘Mia, you hear these stories every day, how do you do it?’

In a world where you catch yourself becoming desensitized to what you hear just to get through the day, being reminded is both horrible but also critically important. What I have come to realize is that most people have very little awareness that the issue of exploitation exists in our community, never mind that it is thriving.

March 8th is International Women’s Day and the second week of March is Sexual Exploitation of Youth Awareness Week.

It is soul crushing that we continue to be experiencing these horrors as a society: I have counselled children under the age of 12 who are being sexually exploited by men; I have met with young teens who are being sent money in exchange for photos or videos; I have seen the kinds of videos and photos sent to these young teens, videos and photos of adult men performing sexual acts on themselves or other youth. Children, youth, and women are being inundated with demands for sexualized photos and videos by what most would consider your average individual.

When we ask people if they are against the exploitation of children, youth and woman, most will say ‘absolutely’, but in the same breath they will say there is nothing wrong with pornography. I would encourage everyone to think critically about consuming pornography where over 88% of its content includes violent acts, and where the majority of those involved are being exploited in some way. Where the fetishizing of young people has become the norm.

As we celebrate International Women’s Day and the Sexual Exploitation of Youth Awareness Week, it’s important to note that we do have the power to create change in the world. I wrote Fragile Seeds to highlight the understanding that the decisions we make do impact others, and the decisions we make for ourselves can facilitate positive change.

We have a long way to go, let’s go together.

It can feel harrowing to know how much work there still is to do in closing the gender gap in media. One thing is for sure, we’re so fortunate to have our wonderful clients, supporters and team on our side. You can count on us to tell your story.

It takes a village to make a film

a meaningful and unforgettable digital presence